This posting walks through the process of configuring SSL for SharePoint 2013 for development or testing purposes using the SelfSSL tool available with the IIS6 Resource Kit.  It isn't necessary to build the web application from the start as SSL: you can implement this procedure for a non-SSL web application to which you want to also implement SSL.  This procedure assumes that: a non-SSL web application has been created and implements NTLM, claims-based authentication; and a root site collection has been created.  It assumes a small, two-tier topology, consisting of a SQL Server database on one server and the SharePoint application on the other.  Hyper V 2012 is the infrastructure platform, employing Windows Server 2012 as the server platform.

References
Notes
Posted by Al at Saturday, June 20, 2015 No comments: 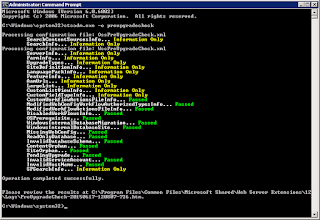 SharePoint 2013: how to restore a managed metadata database

This posting walks through the steps for restoring a Managed Metadata Service Application (MMSA) database. I use this process to "refresh" a development farm with the latest MMSA changes. The steps in brief are:

SharePoint 2013 Tip: how to list all installed SharePoint products

To quickly report on all installed SharePoint-Related products and export to CSV, run this script:

References
Notes
Posted by Al at Saturday, June 13, 2015 No comments:

This posting consolidates my notes with regard to migrating user accounts from old SharePoint instances to new ones. I had the need to cleanup and migrate a subset of users from a legacy, Internet-facing SharePoint 2007 farm, using a dedicated instance of Active Directory Lightweight Directory Services (ADLDS), all co-located on a single server. User account maintenance over the years had not be consistent nor robust and as a result user account formats were inconsistent and also reflected changing domain implementations.  Looking through the site collection's AllUsers list, one would see varying user account userLogin formats, such as:
Even the display names of these user accounts frequently contained varying domain names and other odd formats.  I also found some duplication and special character usage. There was no relationship between the old ADLDS and the new AD authentication services, and so performing a simple user migration was not possible.  Alot of user accounts had never experienced a login event, and many others had not been used in over a year.  Given the formatting of the old user accounts, additional effort was needed to cleanup the user account formatting in SharePoint, and then appropriately map the user accounts to their new implementations in AD.

To do this, I first migrated the content DB using the usual pathway of: 2007 --> 2010 --> 2013, where both the intermediary 2010 and final 2013 farm web applications were configured as standard claims-based authentication web applications.  After the content DB was satisfactorily migrated and the site brought up, I reviewed the list of users in the old ADLDS, drafting a list of which ones really needed to be migrated.  To draft this list, I pulled user account information via repadmin, and then I coordinated with legacy site stakeholders, providing them lists of the old accounts for them to review.  I also pulled user account lastlogins to better identify and determine user accounts useful to migrate.  Over the course of several rounds of stakeholder review and comment, a final list was drafted.

Next, I used this basic script to pull the list of users in the migrated site collection.  The migrated content was contained in a single content database, a single web application, containing a single site collection. So, I only needed to look at one AllUsers list, like so:
This list revealed the extent of what needed to be done.  About a third of what was listed here needed to be migrated.  Because the usernames were so varied, it wasn't clear to me that writing a loop function would be the most time-effective approach.  Instead, I copied the target user accounts into Excel, and then used standard Excel string manipulation tools to generate the following set of statements for each user account to be migrated:
In some cases, users had two accounts, due to what appear to have been misspellings or a customization request by a user, such as to shorten a name to a letter or two.  In such cases, I had to create two sets of user account migration steps, each set moving the legacy user account to the same destination account:
I then incorporated these statements into PowerShell script and executed.  It was useful to have it as a script because in this way I could re-execute the script over multiple trial migration runs - each fresh content database migration bringing with it the old user accounts untouched, and a portion of these would need to be re-mapped to their counterparts in AD.

Another aspect of migrating the old user accounts involved cleaning up the user account DisplayName.  Here again I found a variety of formats and special characters and here again I used Excel string manipulation tools to quickly draft a set of statements for each user account needing cleanup:
These statements I also placed into a PowerShell script for re-use during subsequent trial migration runs.

SharePoint 2013: how to create a custom access denied page

Previously, in SharePoint 2010, when modifying the Access Denied page via PowerShell, you used the web application's UpdateMappedPage method.  Now, in SharePoint 2013, you use the Set-SPCustomLayoutsPage command.  The new approach greatly simplifies deploying such custom application pages.  This posting shows how to make an elementary modification to the AccessDenied,ASPX page, and then configure the web application to use that new page.

References
Notes
Posted by Al at Tuesday, June 09, 2015 No comments:

SharePoint 2013: How to change the Suite Link Bar

The Suite Link Bar is what you see at the top of the page, just below the browser menu bar: 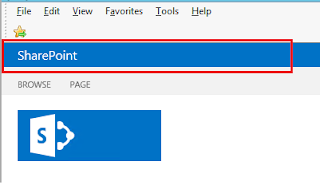 By default, it displays the simple "SharePoint" text.  What you see displayed here is contained in the web application's SuiteBarBrandingElementHtml property. If you interrogate this property, you will see the following:
You can modify this property at any time using PowerShell.  You can even configure this as a convenient hyperlink.  The next steps show you how.

SharePoint 2013: [MissingSetupFile] File...is referenced [...] times in the database but is not installed on the current farm

You are performing a database attach upgrade from some previous version of SharePoint to version 2013.  The upgrade fails or completes with warnings.  Checking the upgrade error log file, you see some warnings like this one:


[powershell] [SPContentDatabaseSequence] [WARNING] [time/date]: File [Features\Bamboo.UserAccount.Setup.WebPart\WebParts\CreateUserWebpart.dwp] is referenced [1] times in the database [content name], but is not installed on the current farm. Please install any feature/solution which contains this file.

Running the Missing server side dependencies rule, you see something similar:


[MissingSetupFile] File [Features\Bamboo.UserAccount.Setup.WebPart\WebParts\CreateUserWebpart.dwp] is referenced [1] times in the database [CS_Content], but is not installed on the current farm.

These messages indicate a problem, but not the location of the problem.  The locations of these missing setup file references are needed in order to remove them.  The solution is to look directly in the database itself for this information; specifically, the AllDocs table.

References
Notes
Posted by Al at Monday, June 01, 2015 No comments: