An error (920) occurred during the action Save As.

You are trying to save a Visio 2007 worksheet as a graphic. During this process, you experience the following error:

This problem is often caused by objects outside of the worksheet that Visio is unable to adequately fit into the viewing area for rendering into an image.  These objects can be located so far off the worksheet that it is difficult to immediately view them; and the scroll bar won't give any indication that these objects are there (it only tracks the current worksheet.  However, there is a simple way to remove these unwanted objects lying outside the worksheet.

Zoom out from the worksheet a bit, and then press CTRL + A.  This selects all of the objects on the current tab.  Note that a dashed green line surrounds the worksheet, but that it appears to extend outside of the current zoom view. 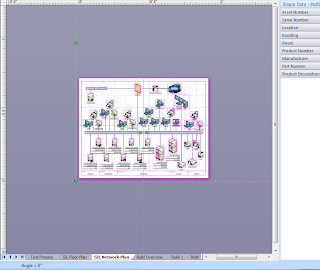 This indicates that the current selection has captured objects lying outside of the current worksheet.  Now, zoom outward until you can see the entire selection area.  In the image below, the zoom level is such that the actual worksheet is miniscule; and now the other objects can be seen. 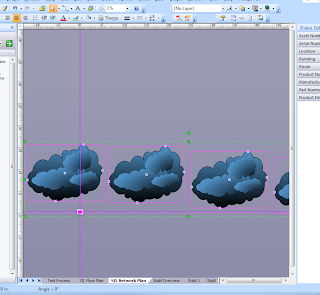 Delete these other objects.  Then press CTRL + A again to ensure that no more objects lay outside of the worksheet.  Once the dashed green selection line only surrounds the current worksheet, you can safely save the current worksheet as an image without encountering further Visio 920 errors.

Email ThisBlogThis!Share to TwitterShare to FacebookShare to Pinterest
Labels: Visio

This solution didn't work for me as nothing was outside the green area to start with.

dfw: can you describe the situation that originally generated this error?

Hi Al
This didn't work for me, there is nothing outside.
I am doing an Org chart that is massive. it is over 2 A2 pages. it was working correctly, but I receive this message on all visio drawings I try to convert to a JPG at a high resolution. I am able to convert/save as a JPG at a low resolution, but because of the nature of the project I am working on I need to save as a high resolution.
Any help is much appreciated.
Cheers
Andy

Thank you for this information, it also happen to my house plan drawing on my Microsoft Office Visio 2007. But when I press "CTRL + A" and I zoom outward the screen it still didn't show the object that are hidden outside the worksheet of my Visio. So I tried another way that may help and much easier to do to solve this Error (920) things..

(2) After all the drawing object been selectedm then select "Cut" which makes your drawing that you've been selected disapeared.

(3) Now press "CTRL + A", then press "Delete". It will delete all the drawing that place out of your worksheet that makes all the problem of ERROR (920) GONE.

(4) Now click "Paste", it will showing back all the drawing that you've selected and "Cut" before.